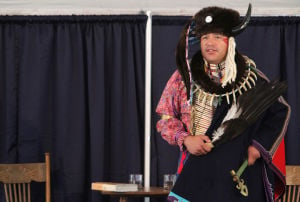 As Taylor Keen took the stage as Chief Standing Bear Sunday — the last night of the Grand Island Chautauqua — a crowd of about 500 stood to welcome him.

The Ponca Chief, who told the heart-rending story of his tribe’s forced move to “Indian Territory” and his fight to take his son’s body back to the homeland in northern Nebraska, was the last of six historical figures who told their stories under the big tent at Stuhr Museum this week.

He told his people’s stories, told to him as a small boy, of the beginning of the earth — how four stars fell to an earth then filled only with water. The stars became a turtle, an otter, a waterfowl and a deer.

Three of the animals were at home in the water, but the deer knew that it could not live in the water all the time. Instead of abandoning the deer, the other animals looked for ways to help.

Eventually, the otter went down to the bottom of the ocean and brought up soil. The turtle sacrificed himself and told the otter to put it on his back, and this became the land on which the deer — and the Ponca — could live.

“Help one another, be kind to one another,” Standing Bear said. That is what the Ponca tried to live by.

As a boy and a young man, Standing Bear lived in a land so thick with buffalo “it appeared to be water.” The tribe tried to obey the ways they had learned from their ancestors.

“In my lifetime, I saw all that change,” he said, noting at first a “man from the east” came and asked them to become Christians and farmers, and they told them they could stay in their homeland. Then a white man came and said there was a mistake in the treaty and the Ponca land had been given to the Dakotas, with whom the Ponca were not friendly. No attempt to fix the mistake was made.

Long before the time the chiefs of the Poncas were taken to Indian Territory and told to sign a new treaty, saying they were willing to move there, the Ponca tribe — along with many other tribes — had been greatly reduced.

“No war destroyed us — it was smallpox,” Standing Bear said.

Standing Bear was among the Ponca chiefs that were taken south to agree to move to the reservation, but “it was hot and dry and we didn’t know how corn could grow there.” The chiefs refused to sign the treaty and tried to go back home, but the government blocked every way but walking home. By the time they got back to the homeland, the government men were there to force them onto the southern land they didn’t want.

Many of the tribe died along the way, including Standing Bear’s daughter and a granddaughter. They were not in the new land long when his oldest son, Bear Shield, also died.

“His last words were, ‘Father, do not let me be buried here,’” he said, adding that meant a trip back to Nebraska, where he would be considered a threat if he returned. But he decided he couldn’t let his dying son’s wish go ungranted. “I just wanted to go home.”

When he reached Nebraska, the soldiers at Fort Omaha arrested him. He was allowed to stand trial.

Standing Bear’s story found its way to a newspaper man who sympathized and helped in the Ponca man’s defense. During the trial, Standing Bear spoke on his own behalf.

“It came down to a conversation between me and the judge,” he said.

“That hand is not the color of yours, but if I prick it, the blood will flow, and I shall feel pain,” he told the judge. “The blood is of the same color as yours. God made me, and I am a man.”

The judge ruled that the Ponca man — and all native Americans — are people under the law and entitled to its rights and protection.

“He said I was a man, that all native people were considered people,” Standing Bear said. “As preposterous as that sounds, even yet today.”