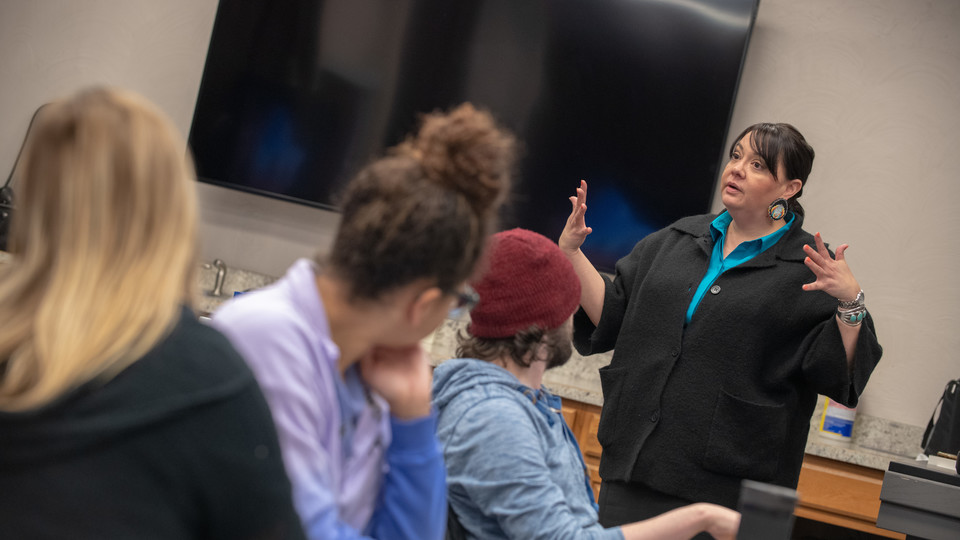 Colette Yellow Robe knows firsthand how life can get in the way of a student’s dreams.

While growing up on the Winnebago Reservation in northeast Nebraska, the high school honors student nursed an ambition for an advanced degree – even though she didn’t always have the courage to say it.

Finances, marriage and motherhood — even a job she loved teaching and advising low-income and minority college students — all seemed to conspire to keep her from reaching her goal.

When she completed her doctorate in educational studies at Nebraska in 2014, her mother, Bernice, took her aside.

At that time, she carried her father’s last name and her ex-husband’s: Colette Mast Polite. Her mother, an elegant woman whom Yellow Robe fondly describes as the “Cheyenne Jackie Onassis,” thought it was time that changed.

“You are a doctor now. You should have our tribal name,” she said. “You should be Dr. Yellow Robe.”

For six years, she provided academic enrichment and workforce development services for local Native American students through the Indian Center Inc., a nonprofit center for urban Native Americans. Among other activities, she serves on the Chancellor’s Commission on the Status of People of Color, the Lincoln Public Schools’ Diversity Communication Council and the mayor’s Multicultural Advisory Committee.

Yet her CV only hints at the obstacles she’s faced in her personal life and career.

Her doctoral dissertation, “Learning to Walk in Two Worlds: An Examination of Soul in My Pedagogy,” was an interpretive inquiry about the role of the soul in teaching and about her identity as a Northern Cheyenne educator. She finished it even though her husband asked her for a divorce when she was in the midst of writing the second of five chapters.

Yellow Robe became an advocate for missing and murdered Native American women after her cousin, Teishia Big Back, died under mysterious circumstances in Billings, Montana. Even if her cousin struggled with alcohol and homelessness, her death should not be forgotten, Yellow Robe said. Four out of five Native American women — including her — have experienced physical or sexual violence.

Yellow Robe has strong roots on both sides of her family. Her father was the descendant of Swiss and French immigrants who met in a migrant camp in Minnesota. However, her grandmother on her mother’s side was Alice Seminole Yellow Robe, a great-granddaughter of Dull Knife, the Northern Cheyenne leader known for the events leading to the Cheyenne Outbreak from Fort Robinson, Nebraska, in 1879.

Yellow Robe’s first taste of college came when she attended a week-long summer bridge program at Nebraska in the early 1990s. After her high school graduation, she considered attending Michigan State University, but it was too far from her family.

“Mom would say we grew up ‘humble,'” said Yellow Robe, who has worked in student-support services with the university’s TRIO program since 2007. “We were working-class, borderline poor.”

She couldn’t find a job after graduating with a bachelor’s degree in sociology in 2000, so she began working in interior construction, helping build the Shopko store at 27th Street and Pine Lake Road in Lincoln. That brought her a moment of truth.

“I didn’t do all this schooling and sacrifice to do construction,” she recalled thinking to herself while she built walls and shelving. “I have to get myself going.”

Then a single mom, she supported herself and her son as a teaching assistant and a research assistant. When she was offered her current position with the TRIO program in 2007, her mentor advised her to turn it down. 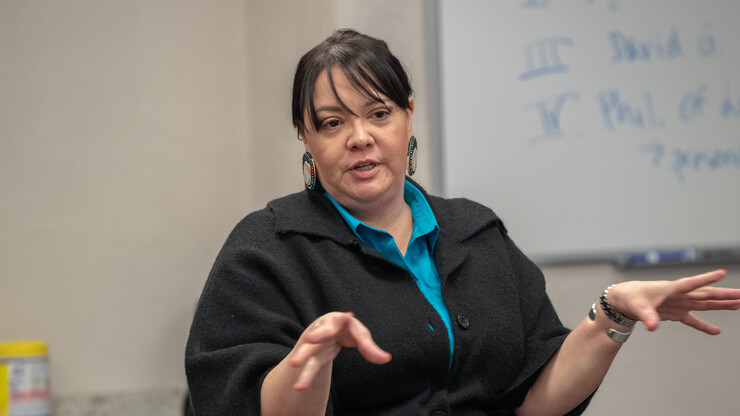 But Yellow Robe had a little boy and she needed health insurance and a car. She met and married a man and had a second child. Her father became ill and died.

For a while, it seemed like her mentor was right. Yellow Robe’s studies slowed and even stopped for awhile. But Yellow Robe came back before it was too late.

“Sometimes you have to do things for a reason,” she said. “It’s absolutely the grit and the glory. We have to learn things the hard way — but we persevere.”

See Original Article at the University of Nebraska