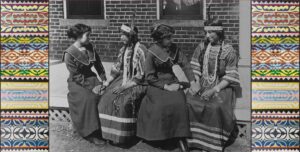 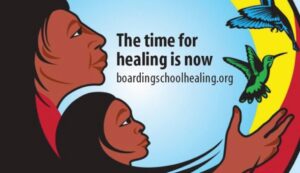 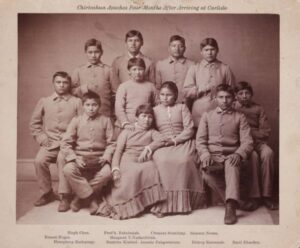 The Department of the Interior on Tuesday said it was bolstering its Federal Indian Boarding School Initiative by partnering with the group that’s been at the same goal for nearly ten years: the

The two groups signed a Memorandum of Understanding outlining each of their expected responsibilities. Read More 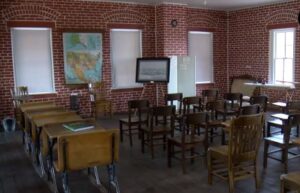 LINCOLN, Neb. (KMTV) — The stories of Indian Boarding Schools have been forgotten by many in less than a century.

Historians with the Genoa Indian School Digital Reconciliation Project want to keep this piece of Nebraska history from fading.

They’re collecting and digitizing records of the Genoa U.S. Indian Industrial School — a residential school that ran from the 1880s to 1930s in Genoa, Nebraska.  Read More 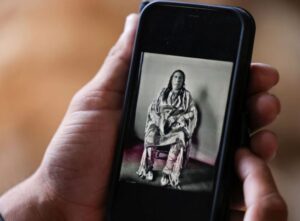 June 22 (Reuters) – Clarence Smith was fresh off a 24-hour bus trip from his Blackfeet reservation in Montana to the Flandreau Indian School in South Dakota in the late 1980s, where he was sent by his family in the hope he would receive a better education.

“On one of the first days of class, a white social studies teacher stood before our class and told us that we were lucky Columbus had found us, because otherwise we would still be living in teepees,” Smith said.  Read More 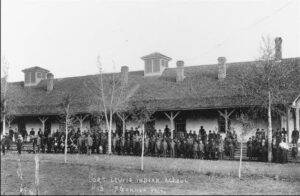 Lesson of the Day: The Forgotten History of Indigenous Boarding Schools

In this lesson, you will learn more about residential schools for Native American children, hear from survivors, and consider the importance of history, memory and justice.  Read More Neb. Indian Affairs director says children were casualties in ‘a war to steal our lands’

Researchers say they have identified more than 100 Indigenous children who died at a notorious government-run boarding school in Nebraska, but they are still searching for their remains.

As in Canada, abuse and neglect were rampant at the schools, and the Genoa U.S. Indian Industrial School in Genoa, Neb., was no exception.  Read More/Listen to Audio 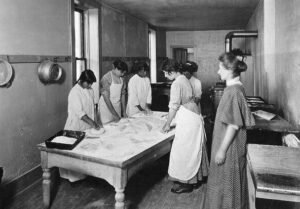 On the edge of town in Genoa, Neb., a stone monument serves as a gravestone on the grounds of a government-run boarding school for Native Americans that has been shuttered for almost a century.

No one knows how many students died there, at the Genoa U.S. Indian Industrial School, though thousands are believed to have passed through its doors. Government documents have proved elusive or obfuscated an accurate death toll. Graves have not been found on the grounds.  Read More 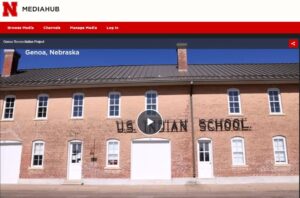 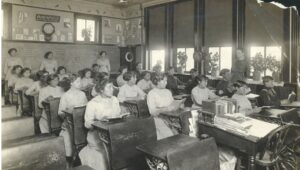 The Tragedies and Successes of the Genoa Indian School

“Nine o’clock taps and the wailing cry of the little boys as they stood under the sleeping porches with faces to the brick walls are two sounds that have always stayed with me.” Nebraskan Grace Stenberg Parsons remembered these sounds from the Genoa Indian School in Genoa, Nebraska. As the daughter of the blacksmithing instructor at the school, Parsons observed the young Native American children who attended the school on a daily basis from 1907-1911. A short memoir of her experiences can be found in the NSHS collections. You can read the full text here. History of Boarding Schools General Richard Pratt, who led campaigns in the Indian Wars in the 1870s, founded the Carlisle Indian School in Carlisle, Pennsylvania in 1879.  Read More 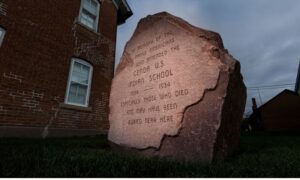 Four years in, a University of Nebraska–Lincoln research project has been successful at uncovering, digitizing and annotating thousands of documents from the Genoa U.S. Indian Industrial School in Genoa, Nebraska, and plans are being made to grow the project further.

The Genoa Indian School Digital Reconciliation Project was founded to tell the stories of the American Indian families affected by the displacement of children to the Genoa school, often through force or coercion.  Read More 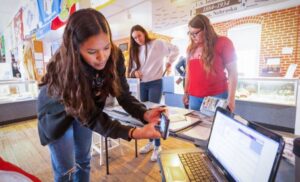 Winona Flowers was walking the same grounds in Genoa, Nebraska, that her great-grandfather walked, but their experiences could not have been more different.

Flowers’ great-grandfather was a young child when he was taken from his family and placed at the Genoa U.S. Indian School, one of more than 300 residential schools throughout the country that boarded Native children and attempted to strip them of their culture. These schools were most commonly established and run by the federal government or by religious organizations.  Read More 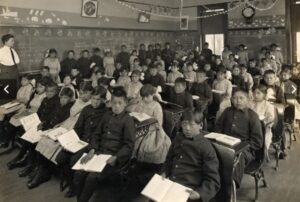 The Genoa Indian School in Nebraska closed in the 1930s, but the known death toll of children at the school is still growing.

It used to be a massive complex: 30 buildings on 640 acres of land. The Genoa Indian School, which sat on the east side of town, was the fourth largest boarding school for Indigenous children in the country. At one point, the industrial school employed around 500 people who lived in Genoa.  Read More/Listen to Audio Story 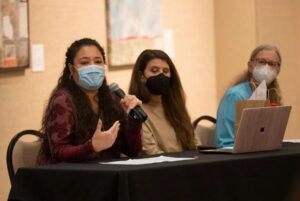 ‘They were teaching us to be servants, not doctors’: Panelists discuss Genoa School

As research continues on the Genoa Indian boarding school, descendants of those who attended are sharing their ancestor’s stories about what the school was really like..

On Nov. 11, a panel was held at the Center For Great Plains Studies to discuss the story of the Genoa Indian boarding school as well as the lasting impact of the school, where Native American children were often sent to assimilate into American society.  Read More 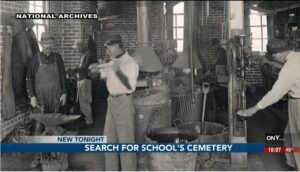 OMAHA, Neb. (WOWT) – Nearly a hundred students who died at a Native American boarding school in Nebraska have been identified.

The news comes as the search for the school’s cemetery continues. Researchers expect more deaths to be discovered.

“There are more children out there that we need to find their names,” said Dr. Margaret Jacobs, who’s research is dedicated to uncovering the truth about Native American boarding schools.

“I don’t even like to call them schools sometimes I like to call them institutions because I believe people get a mistaken idea of when they think of school,” said Dr. Margaret Jacobs, Co-Director, Genoa Indian School Reconciliation Project.  Read More 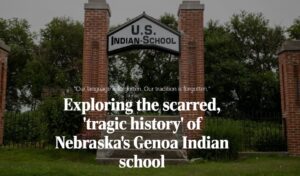 Morgan Lovejoy was about 10 years old when, on a cold winter night in the late 1920s, he hatched an escape plan.

He and a few other boys were homesick for families they hadn’t seen in more than a year. They snuck out of their beds and headed for Columbus, Nebraska, a few miles away, hoping to hop a train that they ended up missing.

Tired and cold, they returned to the Genoa U.S. Indian Industrial School. As punishment for their desertion, they were locked in a dormitory attic for two weeks.  Read More 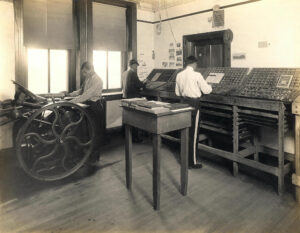 GENOA, Neb. (KMTV) — In 1860, the federal government began forcing indigenous families to send their children away to boarding schools. Over 300 were created throughout the United States, and one of the earliest and largest was in Nebraska.

Over the course of 50 years, from 1884 to 1934, thousands of students from over 40 native tribes and 10 states arrived by train in Genoa. Upon arrival their hair was cut,their native language was forbidden and many of their belongings were taken away.  Read More 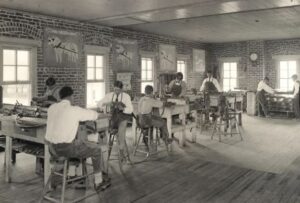 The discovery of hundreds of graves at residential schools for indigenous children in Canada has prompted new attention to similar schools in this country, like the former Genoa Indian School in Nebraska. 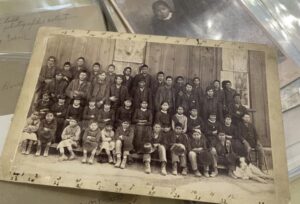 ALBUQUERQUE, N.M. (AP) — They sat inside a dust-covered box that had been stashed away, untouched, for years: black-and-white photographs of Apache students who were among the first sent to a New Mexico boarding school bankrolled by East Coast parishioners and literary fans.

The first showed the girls bundled in blankets with moccasins on their feet. The next, taken just weeks later, was starkly different, the children posing in plaid uniforms, high-laced boots and wide-brimmed straw hats.  Read More 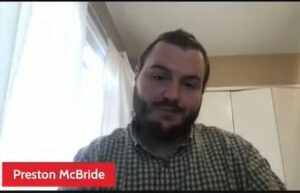 Join us for a conversation with Dr. Preston McBride (Comanche/Settler by descent) as he discusses his post-doc fellowship research on mass Native American burial graves. Dr. Preston McBride lives and works on Tongva lands where he is a Postdoctoral Fellow in the USC-Mellon Humanities and the University of the Future Program. Prior to coming to USC, Dr. McBride earned his Ph.D. in History from UCLA and was the Charles Eastman Postdoctoral Fellow at Dartmouth College, where he also received his B.A. and M.A. His dissertation and book manuscript evaluate student health, environmental conditions, and public health policies at four Native American boarding schools.  View Video 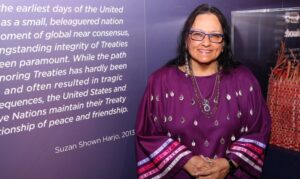 Children in the Meadows and Wetlands

There are children in the meadows and wetlands,

Native children ran there to hide;

When teachers pulled and butchered their hair

When teachers stole their medicine bags

When teachers collected their moccasins 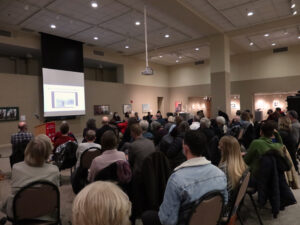 The story and lasting impact of the Genoa U.S. Indian Industrial School in Genoa, Neb., is the topic of a panel hosted by the Center for Great Plains Studies and the University of Nebraska State Museum on Nov. 11, at 5:30 p.m.

In this presentation, team members from the Genoa Indian School Digital Reconciliation Project and community members will share the lasting impact of the school, new research, and deep insights into the personal stories of those who attended.  View Panel Video 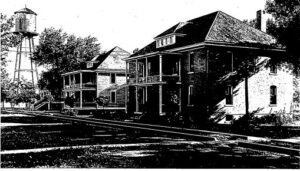 Article Summary: In an effort to assimilate Indian children into white society, non-reservation boarding schools were built. These schools were located far from reservations to reduce contact between the children and their parents and Indian customs. Genoa, Nebraska, was selected as a school site because the government already owned the building previously used for the Pawnee reservation headquarters. Most of the children in the Genoa school made friends, adjusted to harsh conditions, and learned the art of showing a “white” veneer to get through their school years. But they paid a high price for their education in terms of their physical and emotional health. They were separated from their families and there was not enough money to adequately feed, clothe, and educate them. Full assimilation of the Indian children into white society did not occur and the schools began to close in
1901. Genoa school closed in 1934.  Read Full Article 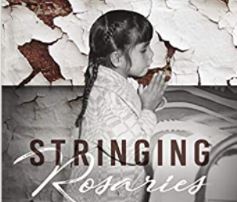 Denise Lajimodiere’s interest in American Indian boarding school survivors stories evolved from recording her father and other family members speaking of their experiences. Her research helped her to gain insight, a deeper understanding of her parents, and how and why she and her siblings were parented in the way they were. That insight led her to an emotional ceremony of forgiveness, described in the last chapter of Stringing Rosaries.  More About the Book