Native American tribes gave up millions of acres to the federal government in the 19th century in exchange for promises of funded health care, education and housing. But time and again, those funds have been cut.

The recent across-the-board federal budget cuts, known as sequestration, are no exception. They came with a 5 percent reduction in funding for mental health services, including suicide prevention. That’s especially troubling for Native Americans, whose suicide rate are four times the national average.

Because of the reduction, the Oglala Sioux Tribe in Pine Ridge, S.D., will not be able to hire two additional mental health service providers, says Cathy Abramson, chairwoman of the National Indian Health Board. And that could have devastating effects.

“Since the beginning of the year, there have been 100 suicide attempts in 110 days on Pine Ridge,” Abramson said at a Senate committee hearing in Washington last spring. “We can’t take any more cuts. We just can’t.”

Emmy Burruel still calls a sheep camp on the Navajo Nation home, even though she lives outside the reservation in Flagstaff, Ariz. Three years ago, she and her husband were fixing up their guest room when they received a phone call from her mother, crying hysterically.

Burruel and her husband packed up the kids in the middle of the night and drove three hours to be with her mother. Burruel says she wishes she could have recognized the signs of her brother’s depression — the red flags she sees so clearly now.

“I should’ve asked or I should’ve intervened somehow. But on the flip side of the coin is, you can’t blame yourself,” she says. “You can’t put yourself in that place.”

Instead, she now helps others to recognize the signs by teaching suicide prevention workshops to counselors, community leaders and social workers. In Navajo culture, she says, suicide is a taboo subject.

“I heard one shaman say you have to know a little bit about the bad to fix the good. I suffered the bad, so now I need to know I can fix the good and help other families,” Burruel says.

But because of the sequestration, she says, the workshops will reach fewer people.

Brandy Judson runs the suicide prevention program at Native Americans for Community Action, which provides free or low-cost mental and physical health care in Flagstaff. She says she knows how effective the program can be when its fully funded.

Judson helped identify several young people in a school who had prior attempts or extreme thoughts of suicide.

“Seeing them now, almost a year later, having gone through counseling and feeling much better and no longer having those thoughts — it’s really powerful,” she says.

And with 80 percent of her organization’s budget coming from the federal government, Judson says they need funding to sustain the program.

“This isn’t a 3-year job,” she says. “This is a long-term problem that is going to take decades.” 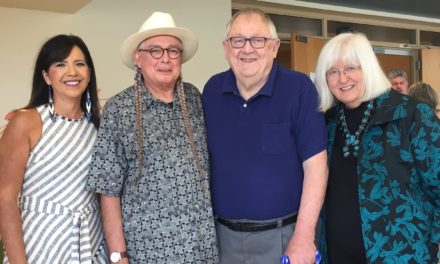