On the Ponca homeland in Northeast Nebraska, Alice Erickson looks up at the bronze statue of her great-great-great grandfather—Chief Standing Bear. Created by artist Ben Victor, the 11 foot statue depicts the Chief pleading for his freedom. Arrested for leaving Indian Territory to return to his home near the Niobrara River, he declares himself a person under the law. “I am a man,” Standing Bear said to the judge at his famous trial. “The same God made us both.” Standing Bear won his case and is recognized today as a civil rights hero. But to Alice, the Chief is simply family. “He’s up on that hill overlooking our land,” she says. “And he’s with us always.”

The full Nebraska Stories episode airs Thursday Mar 21 at 8 PM CST on NET Television, with a rebroadcast on Monday March 25 at 10 PM CST. 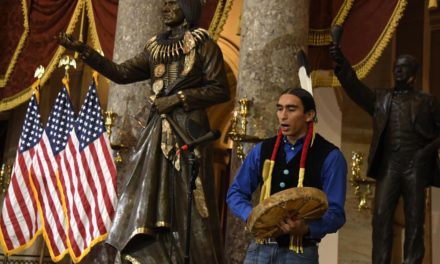