The Pawnee Scouts were recruited to be scouts in the U.S. Army from the Pawnee Reservation Village just south of Genoa in 1864. They helped protect the Pawnee Village, protected the workers laying the Union Pacific Railroad tracks through Nebraska, and went on expeditions with the Army.

The dedication ceremony for the Pawnee Scouts Memorial Highway sign by Genoa was on June 12, 2021. It was held by the Pawnee Reburial Memorial in the Genoa cemetery. The ceremony started with the Pawnee visiting the Nance County Veteran’s Memorial and Resource Center opened by Dennis McCoig and Jon Epley. Lunch was held in the Genoa Park and was attended by Head Chief of the Pawnee, Pat LeadingFox and his wife Vicky, Band chief Tim Jim and daughter Micah Jim, Tweety Bowen, Band Chief Morgan LittleSun and son Cody, Herb Adson, Cultural Resource Division of the Pawnee Nation, his wife Kim and son Robert Adson, Band chief Adrian Spottedhorsechief, Band Chief Matt Reed who is also the Historic Preservation Officer and his brother Todd Vetter.

The dedication ceremony started with a welcome to honored Pawnee, dignitaries, and everyone gathered. The Creator was thanked for blessing the day with such nice weather. A brief history of the project was given by Nancy Carlson. The project started a year ago when Nick Moser and Jerry Carlson read about the dedication of the Medal of Honor Highway. A Pawnee Scout was included in the 73 people who were honored. Nick and Jerry felt that all Pawnee Scouts should be honored, so they started the process. They asked the Pawnee Nation Business Council for permission, which was granted and encouraged. The section of Highway 22 from near Genoa to near Fullerton was selected because the Pawnee Scouts were recruited from the Reservation Village. This village was located where the dedication ceremony took place. The named section of Highway 22 ends north of Fullerton near a Pawnee sacred site, and many older Pawnee Villages were located along this section of highway. With the highway section defined, the Genoa U.S. Indian School Foundation was asked to be the sponsoring organization. Resolutions of support were obtained from the Nance County Commissioners, the City of Genoa, the Nance County Veteran’s Memorial and Resource Center, and the Pawnee Nation. The application was submitted to the Nebraska State Highway Commission where it was approved, and Governor Ricketts signed it in January.

Herb, Kim, and Robert Adson, Pat LeadingFox and Adrian Spottedhorsechief sang songs and drummed, including a flag song, Warrior song, and a prayer song. Nick Moser played taps through the Genoa cemetery, closing the program. Visitors then viewed the displays from Jerry Carlson and John Drozd, while visiting with the Pawnee.

The event happened because of the work of many people. We want to thank our donors: Philip and Sandra Swantek and Jerry and Nancy Carlson, for purchasing the signs and for the following donors who made this day happen: Nance County Economic Development, Union Pacific Railroad, Helen Schweizer, Ralph Miller, Preferred Sands of Genoa, Nance County Veteran’s Museum, Genoa Community Bank and PointsWest Community Bank of Fullerton. We also want to thank the following sponsors for making this event possible: the Genoa U.S. Indian School Foundation, the Pawnee Nation, the Nance County Supervisors, Genoa Historical Museum, the City of Genoa, Nance County Veteran’s Memorial and American Legion Post #144. 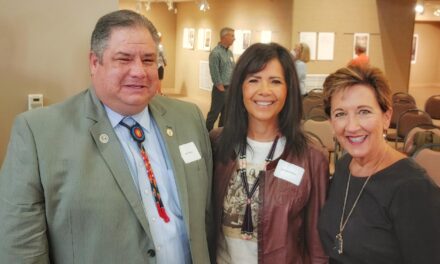