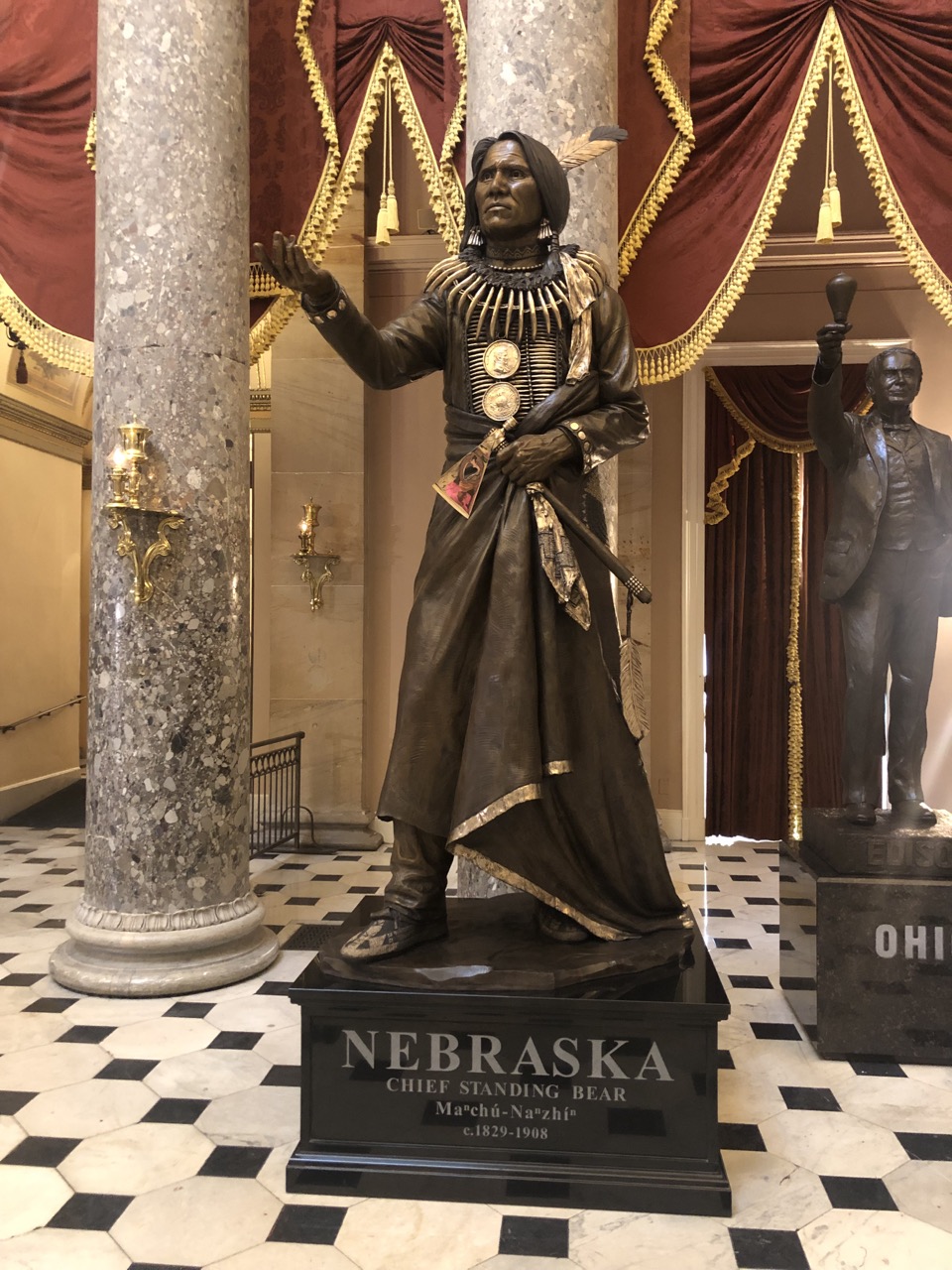 Each year, nearly 3 million people visit the U.S. Capitol.Many of them start their visit in the Capitol Visitor Center, an underground complex on the east side of the Capitol.Those visitors will now meet an unusual greeter, the bronze visage of a Ponca chief whose story and journey began 142 years ago along the banks of the Niobrara River in Nebraska.”If we’re going to improve the future, we must acknowledge the past,” said Rep. Nancy Pelosii (D-California), the Speaker of the U.S. House of Representatives. “Today, our nation takes another step forward in that journey as we honor a man of extraordinary courage, perseverance and strength, Chief Standing Bear of the Ponca Tribe.”

Last Wednesday, Congressional leaders, Ponca tribal leaders and others unveiled the statue of Standing Bear inside the Capitol Visitor Center amid the drums, singing and prayers of the Ponca people, including an honor song by a descendant of Standing Bear, Steve Laravie Jr.The statue replaces one of William Jennings Bryan, the famed Nebraskan orator and politician. The Nebraska Legislature passed a bill in 2018 to replace Bryan’s statue with Standing Bear’s, as well as replacing a statue of J. Sterling Morton, a former newspaper editor and founder of Arbor Day, with one of author Willa Cather.Each state has an opportunity to select two statues for permanent display in the U. S. Capitol. While most of those statues are placed in the National Statuary Hall, a chamber inside the U.S. Capitol, 24 are now inside the Visitor Center.
Nebraska Gov. Pete Ricketts (R) described Standing Bear as a relatively unknown Civil Rights hero.“It’s an honor to be here today to recognize a Nebraska hero, and one of the important Civil Rights leaders in our country that almost nobody knows about,” he said.Standing Bear and his people were forced from their homes along the Niobrara River in northeast Nebraska in 1877 and marched south to Indian Territory, or Oklahoma. Along the way, many Poncas died, including Standing Bear’s daughter Prairie Flower.After a nearly a year in Oklahoma, nearly a third of the Poncas had died of disease and starvation, including Standing Bear’s son Bear Shield. On his deathbed, Bear Shield made his father promise to return his remains to his ancestral homelands in Nebraska.
And so in January 1879, Standing Bear and a few of his followers set out for Nebraska. But once they arrived, they were arrested and imprisoned. A newspaper editor, Army general and two attorneys decided to take up Standing Bear’s quest for freedom.Standing Bear spoke during the ensuing two-day trial, addressing Judge Elmer Dundy directly.“He stretched out his hand and said, ‘That hand is not the same color as yours, but if I pierce it, I shall feel pain. If you pierce your hand, you will also feel pain. The blood that will flow from my hand will be the same color as yours,’” Ricketts said Wednesday.“His compelling testimony led the judge to a landmark decision.”
Dundy decided to free Standing Bear, rejecting federal prosecutors’ assertions that the chief was not a person or human being under existing U.S. law. His ruling established Native people as persons under the law, deserving of the same civil rights and freedoms as others.Rep. Jeff Fortenberry (R-Nebraska) said Standing Bear’s decision to fulfill his dying son’s wish became the catalyst that has inspired many generations of Ponca people and now non-Native people.“Chief Standing Bear didn’t seek to be a civil rights leader,” Fortenberry said. “He simply wanted to bury his dead son on their ancestral homelands, and in doing so, he called forth the essence of human dignity.”Sen. Chuck Schumer (D-New York), the U.S. Senate Minority Leader, said Standing Bear’s efforts to win his freedom is a quest that continues today.“Nearly 150 years later, our country still struggles to live out the full meaning of Chief Standing Bear’s breakthrough,” he said. “The legacy of forced relocations, broken promises, wrongful detainment unfortunately endures.”“It is incumbent on all of us to recognize that fact and to make sure that Native Americans get nothing less than full justice under law.”
Pelosi recognized the presence of Rep. Deb Haaland (D-New Mexico) and Rep. Sharice Davids (D-Kansas) in the Capitol Visitor Center on Wednesday. They are the first two Native women to ever serve in Congress.“Wouldn’t Chief Standing Bear just love to know that Deb Haaland, as a freshman, is the chair of the Public Lands Committee of the Natural Resources Committee right from the start?” she said.Nebraska State Sen. Tom Brewer – who, as a citizen of the Oglala Sioux Tribe, is his state’s first Native state senator – offered the benediction at Wednesday’s event.“We thank you for Chief Standing Bear’s unwavering courage to speak the truth, to proclaim that Native people are recognized as people, that we have God-given rights that man’s law must respect,” he said.
Chief Standing Bear National Historic Trail

On the same day of the statue dedication at the U.S. Capitol, a bill that recognizes the resilience of the Ponca people inched forward in the U.S. House of Representatives.H.R.2490 authorizes the Department of the Interior to conduct a feasibility study of the Chief Standing Bear National Historic Trail. The 550-mile path traces the forced removal of the Ponca people from their homelands in Nebraska to present-day Oklahoma. The proposed trail also marks Standing Bear’s return to Nebraska.The bill was approved by unanimous consent at a markup of the House Committee on Natural Resources on September 18. It can now be considered by the full House.

Natives in the U.S. Capitol

The statue of Ponca Chief Standing Bear isn’t the only representation of Indigenous peoples in the U.S. Capitol. Other Native figures in the National Statuary Hall Collection include: 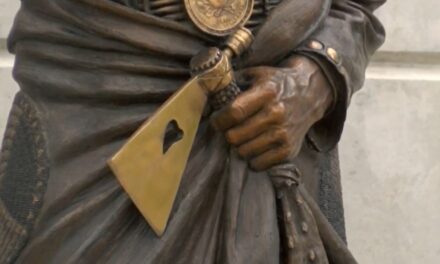